Grenada Hash House Harriers – a walk or a run for everyone

This past Saturday our family walked a 3 mile loop with the Grenada Hash House Harriers (HHH). Being July 1, it was Canada Day. We were amongst a mix of local people and cruisers. As far as we know, the Canadian cruising families that participated in the hash include “SV Pinocchio” from Quebec City, “SV Maple” from Vancouver, and our family on “SV Aphrodite” from Ottawa. Canada is well-represented in the Caribbean. There were likely some other cruisers or expats that were at the hash. We just haven’t met them yet.

The HHH self describes as a “drinking group with a running problem.” Chapters of the HHH can be found worldwide. We had a lot of fun at our hash, and got very muddy. It was a great opportunity to get some exercise, and connect with local people and other cruisers.

To be clear, you can walk or run a hash. The Grenada HHH group seems to emphasize camaraderie and having fun. The cost to participate was roughly $3 US. That price covered our entire family of six.

There were about 250 people at our hash, which I understand is a typical turnout for them Grenada HHH. There were people of all body types and fitness levels. Interestingly, I didn’t see a single person stretch their quads or do a side lunge, ever.

Anyway, the hash began with a man on a microphone who gave some direction to hash “virgins”; that is, people who are new to hashing. As part of the starting formalities, one man drank beer from his shoe – such is the rule for someone who brings new shoes to a hash

I had some concerns that one of our kids would fall, or cause a sit-down scene during the hash. Our kids are 11, 9, and 6-year old twins.

As any parent knows, sometimes even a small abrasion can be a major setback and can add unwanted drama. I’ll spare you the stories, but we’ve hiked on more than one occasion with a whining child. It isn’t pretty.

It turns out my fears were unfounded.

The hash was more strenuous and tricky than I had expected, but it afforded us some amazing views. 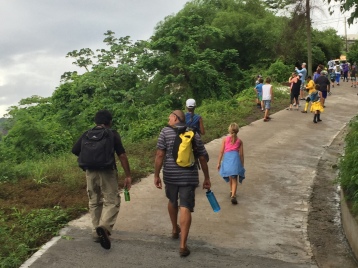 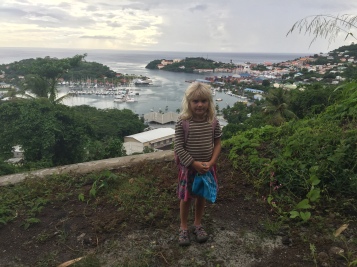 Some people wore gloves to help them to grip tree branches as we skated down steep, muddy tracks.

Most people at the hash wore hiking boots, runners or cross trainers. My husband, Rick, wore his boat shoes. The boat shoes proved to be very slippery but Rick managed to keep his balance without falling once.

Rick tends to excel at all things athletic. In contrast, I have a lot of inner conversation before committing to a throw. Given our experience over the past two years sailing on our catamaran, I should write a book called, “Building marital synergies: one line toss at a time”.

Back to the hash. The hash organizers plan the hash routes a week or two in advance. They talk to home owners and request permission if they want to cross properties. Just prior to the hash, they mark the hash route using colourful bunches of shredded paper.

A hash organizer told me the trails start off quite nicely but the routes quickly deteriorate through use and because we’ve had some rain. By the time I had arrived the trail had been trampled by about 246 people ahead of me.

At the steepest and muddiest part of the trail, an Australian couple turned back. They joked that they had “seen this all before”. It seemed they were not interested in a muddy hike.

Another Canadian cruiser from Quebec, however, pressed on. Her name is Johanne. What makes Johanne’s story so remarkable is that she and her husband, Marcus, have seven young kids. All nine of them live aboard their ketch (that’s a boat with two masts). As I’ve said, their boat is called “SV Pinocchio“. They have crossed the Atlantic twice. Their family plans to circumnavigate.

Johanne brought four of her children to the hash, including her one-year old daughter Florence. 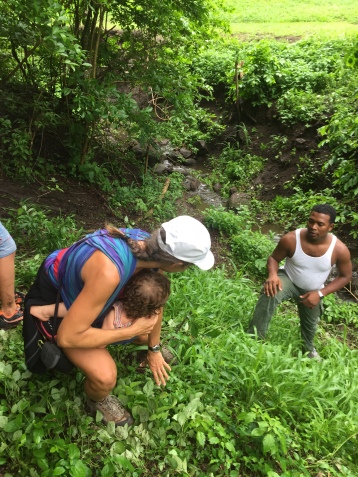 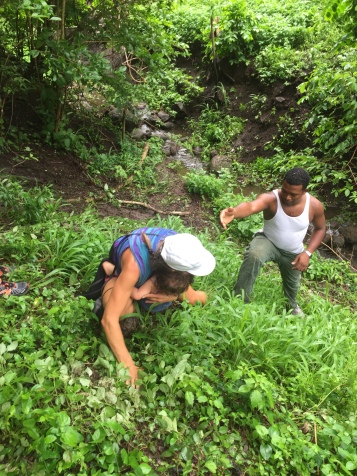 Florence rode in a colorful, Canadian-made Chimparoo brand carrier, and fell asleep during the hash.

Parts of the trail were less treacherous and quite lush and scenic. 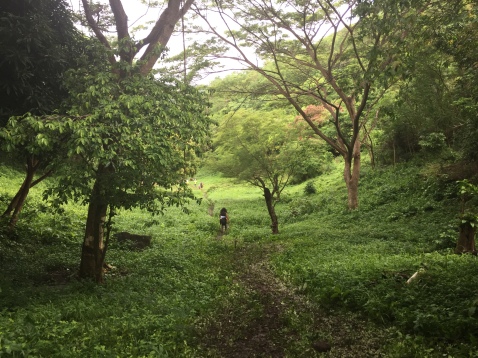 The rain added to the slick terrain. But, the organizers were really helpful. I fell once as I tried to run across a steep bank. One of my legs slid down a slope. It turns out it was better to walk along the valley.

We didn’t see three of our kids until the hash was over. Betty (11), Paul (9) and Henry (6) had raced ahead – providing me with great motivation to push forward. Rick and I walked with Karen (6).

Our kids walked the entire route with Janet from “SV Maple” and her two young daughters. Their family owns a Leopard 38 catamaran. Janet and her husband, Darryl, bought their boat in Albania and sailed her across the Atlantic to the Caribbean.

I really enjoy meeting other cruising families. I am always amazed to meet people who have crossed oceans with their children.

Anyway, after two hours, Rick, Karen and I had finished the hash. We were reunited with our kids and the other hashers. It was time to wash off. 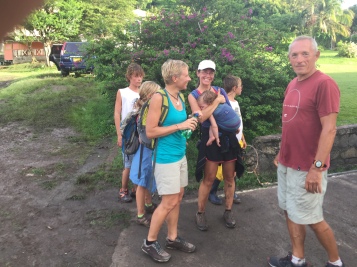 People enjoyed some well-deserved beer. A DJ provided a little music for dancing.

Later, on the bus ride back to the dinghy dock, Henry (6) told me that he had felt tired during the hash but he just kept walking. I liked his optimism, and was pleased to hear that all of my kids did very well and had energy to spare. I am looking forward to participating in another hash. It is a great way to get fit. And, it allowed us to see parts of the island of Grenada that we would otherwise never see.