Living with four kids in a boatyard in Trinidad – turns out, it isn’t so hard to stay ‘on the hard’

“I said no razor knives!” – my husband, Rick Escher, establishing boundaries with our son, Henry age 6, at the Power Boats boatyard in Chaguaramas, Trinidad.

It has been about two weeks since our catamaran was hauled out of the water in Chaguaramas, Trinidad. Following the recent oil spill, we have cleaned our boat thoroughly. Collectively, it took Rick and I about fifty hours of effort to remove the oil from our boat. Fortunately, most of the oil stains have come out. Below are some pictures of our boat shortly after Aphrodite was hauled out of the water. Fellow cruisers might note that the boat with the yellow awning belongs to Chris Doyle, author of the popular cruising guides for the Caribbean. 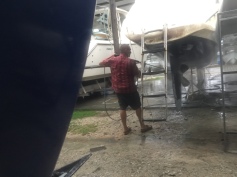 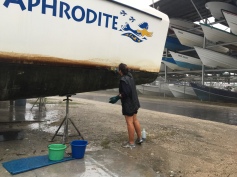 This was a planned haul-out. We are in the boatyard to paint the hull, service the engines, align the propeller shafts, inspect the rigging, among many other things. We are doing some of the work ourselves and have also lined up some contractors. Rick is keeping a close eye on the schedule and the work. Though one of the pictures looks like a caricature of micro management, Rick assures me that he was simply watching the contractor to learn how to properly install a cutlass bearing.

We plan to be back in the water by late November.

It is much, much easier than we could have imagined living life ‘on the hard’ with our four young kids. I expected that it would be mayhem doing dishes. I thought that it would be a nightmare to scale the boat what with the risk of falls and head injuries (it hasn’t happened yet). I expected to be escorting people to the bathroom at the whim of tiny bladders. I needn’t have worried.

We are staying at a boatyard called ‘Power Boats’ in Chaguaramas. The bathrooms are clean and close to our boat. Washing dishes is a non issue. We wash them in our galley sink, and the water spills out onto the concrete below. The boatyard has a raw and industrial vibe. But, I prefer that our kids don’t toss juice off the back transom. I remind them that we are not living in the medieval times.

The showers are a short walk from our boat. We have bought hot water tokens but I haven’t used one yet. (I am accustomed to having cold showers. A hot shower seems extravagant.) On the hard we have full-time air conditioning. We have stairs with a handrail.

We also have shore power. And, we have a long garden hose. We can clean things without having to make our own, reverse-osmosis water. The Power Boats staff have been very friendly, and their security guards are on active duty 24/7. A security guard let Paul drive his golf cart today, which impressed Paul tremendously.

We are within a few minutes’ walk of the boatyard laundromat. The laundromat is wonderful. When we are at anchor I usually hand wash everything, including sheets and towels, in large buckets.

Since we arrived on the hard, I have rediscovered the simple pleasure of cleaning lint from the dryer. And our 6 year-old twins were excited to hold the lint in their hands. They didn’t know what lint was until I told them. All the kids marvelled at the heat emanating from the clothes.

It feels a bit like the 1950s where kids play, and everyone is generally happy and work gets done. But, my nostalgia for simpler times stretches only so far – I do appreciate that we have WiFi.

It helps that there is another little boy who is staying with his parents in the boatyard. In fact, his company makes all the difference to how much we can accomplish while we are here.

Left to their own devices our kids grow tired of one another. They can whine and beg to use electronics, but add another child in the mix and suddenly they see the beginnings of an adventure.

A couple of days ago our son, Henry, found a broken tape measure. Henry found this to be very entertaining. Tomorrow he plans to repair the tape measure with help from his dad. Here are some pictures of our twins, Henry and Karen (age 6) playing in the fort that they made at the Power Boats boatyard. As well, I’ve included a couple of pictures of a spinning gadget that Henry made using found items. 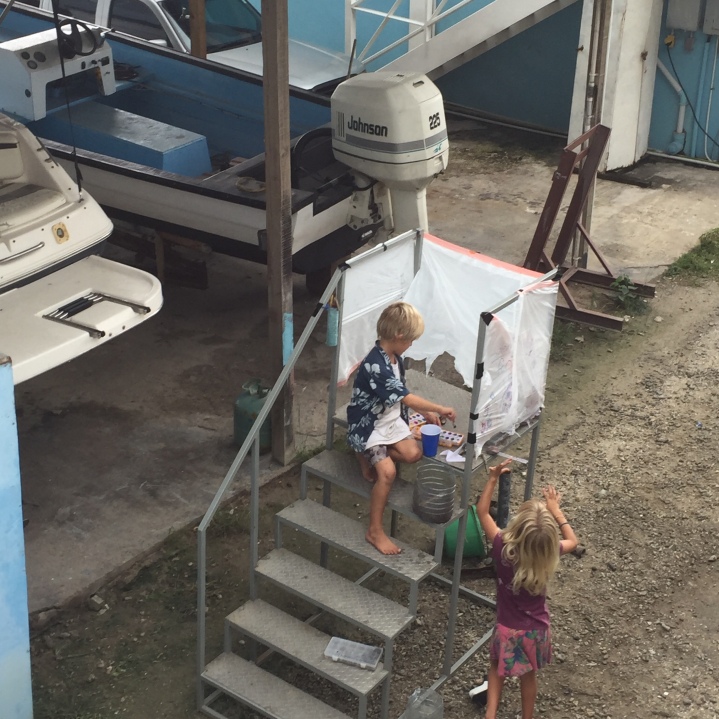 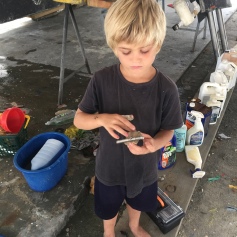 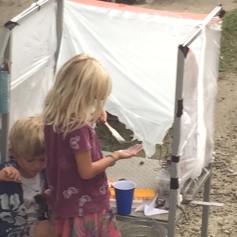 Henry seems to be the budding builder in our family. He likes collecting treasures that he finds around the boatyard such as old screws, and the previously mentioned razor knife. On a recent visit to a hardware store, Henry was very annoyed when I wouldn’t buy him a small sledgehammer. I bought him some wood glue instead. Henry takes very good care of the glue and is careful to close the lid after using it. Rick bought Henry a tool box to store his things.

The boatyard gives our kids an amazing sense of independence and autonomy. But, we have limits as to where they can travel. They can visit their new playmate at his boat, for example, but they can no longer traverse the yard and hang out at the local Roti hut. The Roti hut was a great draw for our kids because they liked to watch people feed the iguanas. The iguanas enjoy eating cooked chickpeas.

Once in a while, I do indulge in junk food. I have a terrible sweet tooth. But, for the most part, we have been eating a fantastic assortment of vegetables and fruits. I visit the central market in Port of Spain every Saturday morning. Today, I made homemade pesto and pasta, which we had with marinated barbecued chicken, along with homemade pickled beets and coleslaw. I am planning to make a pumpkin pie this week, but I try to curb my cooking in favour of simplicity. That way, I can get more done in terms of work on our boat, which is why we’re here in the first place.

To stay on the topic of food – a topic that I love – some of you might know that our son, Paul, has serious food allergies. He is anaphylactic to tree nuts and has a variety of other allergies. But, since we have arrived in Trinidad, Paul has been eating beef and peanut butter. Here in Trinidad, we met with an allergist (Dr. Gillian Wheeler) and a pediatric gastro specialist (Dr. Sherman Soman). They encouraged us to re-introduce beef and peanut butter, and told us how to do it safely.

Henry’s asthma has also been under review by the allergist in Trinidad. Henry has been doing well, and had a flu shot last week as a preventative measure. When the allergist tried to allay Henry’s fears about the getting the flu shot needle, Paul helpfully told him he was “going to feel the burn”. Regardless, Henry did very well. He was brave and now tells us – as we plan to get our yellow fever shots next week – that all we need to do is to “breathe in and it will all be over”.

In the boatyard I was told to expect mosquitos, but we have seen very few. I thought I’d hear howler monkeys but I have not yet made the effort to roam the woods. I have also not strolled the boardwalk in Chaguaramas.

I content myself with almost daily parrot sightings close to the boatyard, and wake up to the sound of yellow finches. They might be canaries – their song sounds like something Apple would grab for their next and best ringtone.

So, the short story is we are working hard but having a blast. If you are arriving with kids, it’s not at all hard living on the hard here in Chaguaramas.

Thanks for reading! If you haven’t seen it, here is the video I took when Paul was eating pasta with a tomato and beef sauce.