We’ve been busy. We left Luperon, Dominican Republic (DR) a few days ago. We are now in Puerto Real, Puerto Rico (PR).

This week, we are traveling with our friend, and former New York City Police officer, Carl De Angelo. Carl now lives in Miami but retains a New York City accent.

I appreciate Carl’s humor, perspective, and hand’s on attitude. I assume that Carl is new to sailing; he once referred to the aft quarters as the ‘ass of the boat’. Then he wondered if he was being too crass.

Carl arrived on our boat as our family was readying our boat for passage to PR. Far from presenting Carl with a view into the sanitized veneer of our family, Carl was provided with a front-row seat as our personalities unfolded under stress. On display were attitudes towards sleep and food that would narrow the eyes and tighten the lips of most people.

Our ‘to do’ list was long and included things like filling our fuel tanks, provisioning and storing six months of groceries, organizing storage lockers, and making last-minute repairs.

We wanted to cross from the DR to PR when conditions were favourable. To that end, my husband, Rick, closely watched the weather, and spoke to marine weather expert, Chris Parker, on SSB radio, during his morning call-in shows.

Rick also spoke to sailing guru and author Bruce Van Sant. Bruce Ian the author of several books includingThe Gentleman’s Guide to Passages South: The Thornless Path to Windward . Bruce has crossed the Mona Passage approximately sixty times. The Mona Passage is the body of water that runs between the DR and PR.

Following Bruce’s advice, we sailed mainly at night, and close to shore. First,  we sailed from Luperon to Escondido. The first couple of hours were very rough to the point that Carl contemplated mutiny. It was clear he was tired and unhappy.

As an aside, Carl’s seasickness and reaction to the movement of our catamaran, is not unlike my initial reaction 16 months ago, when we began to sail our boat. I was not prepared for the explosive power of the water or the swimming sensation that is derived from the co-operation of the twin hulls as they dance over the tops of the waves.

Carl told me later that, when the big waves struck, he felt like he wanted to be lifted from our boat by a “great sky hook”. Yet, Carl was back on his feet after a night of sailing and sleeping off his seasickness (thank you Dramamine).

We waited for about six hours in Escondido. When it was dark and the winds were light we sailed to Mayaguez, PR.

Calm seas in the Mona Passage 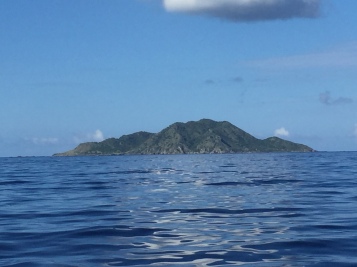 Our sail was largely uneventful, except for hitting a line of debris in the open water when we strayed too far from shore. Generally, the water was calm with waves between 1-2 feet.

And that’s brings me to where I began this blog post. We are now in a Puerto Real. The kids as swimming off the back of our boat and Carl took pictures of the sunset. 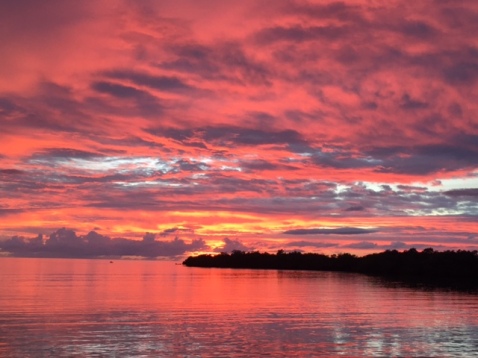 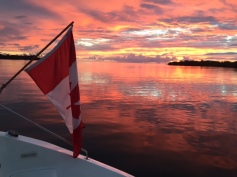 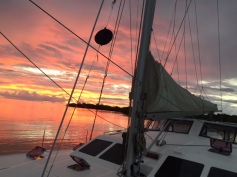