Give me Voodoo: fear and fascination as a cruiser in Haiti (with bonus dream sequence)

Let me tell you about the time I spent in Ile a Vache, Haiti. Here is my story as told from my white, Canadian, catamaran-dwelling perspective. Voodoo? I find it darkly fascinating. Did I mention we are from Ottawa and have four kids?

But, first, here’s a cameo from Vildo, a local man we met during our stay in the harbour at Ile a Vache. Vildo cleaned our boat, took us to the main town and invited us for supper one evening at his home. Vildo has a generator, and his wife (like me) does all of their laundry by hand.

Standing on the gleaming deck of our catamaran, it is difficult to see the paddler at first, but soon a dark silhouette emerges in the moonlight. His eyes catch mine, and he smiles. “Be careful,” he says as he continues his gaze, never faltering. His canoe was hewed from a mango tree by sweat, tradition and pride. He turns his boat and paddles back to shore.

Our first night in the Ile a Vache harbour was mysterious and exciting. Drum beats and singing came loudly across the water. We turned off our stereo and listened.

And, while my kids said it sounded like “we were in the jungle” I thought of the 1980s actress and wild child, Cosby star Lisa Bonet in a movie I’ve never seen, dancing topless in a voodoo trance.

Later, we were told that the sound had come from the village celebrating Carnival. I was somewhat sorry to have missed it. But, in the same circumstances, I would probably stay on the boat again. Dinghies have been known to go for a walk about at night. On Ile a Vache, there is no electricity. There are no streets, let alone lights.

On shore, the village smells like campfires and the houses tend be colorful with outdoor latrines. 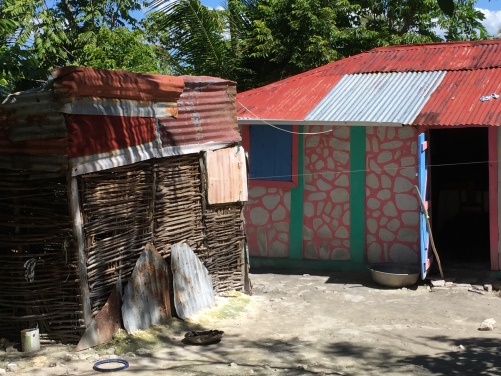 In some gardens, there are tombs. I was told that a single tomb could accommodate multiple generations of occupants.

And, what’s with the marking on the tombs? Could it be Voodoo? “Probably,” shrugs one Christian missionary named Bill Montgomery.

Bill brings education to remote communities and has other things to think about. The families that Bill visits live on the mainland, up a mountain. These kids walk six hours a day to get to and from school. “They need help the most,” he says.

Another Christian missionary tells me about her interaction with a Voodoo priest who she invited to come to church. Initially, he told her that he couldn’t attend church because he had no shoes. She offered to eliminate that issue by cutting off his feet. With humor she cemented a bond and, as she puts it, the Voodoo priest was saved.

His comment leaves me wondering was that unusual local man merely bat-shit crazy in the main town of Madam Bernard? Why was he talking about my white skin and death? Why was he dancing about my family clapping his sandals in the air? Why were all the locals looking bemused.

My Haitian Voodoo expert will tell me this: his wife believes in Voodoo. And, a cruiser recently gave him $100 to find his dinghy by using the services of the local Voodoo priest.

I still don’t know anything about Voodoo. There is much more to Haiti than Voodoo, and much more to learn than I could ever possibly know. So, like Vildo reminded me in the dream sequence, when describing another culture and it’s intricacies, I must be careful. 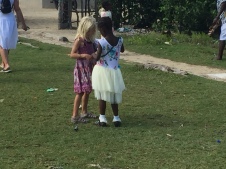