Don’t mess with a missionary, man – Ile a Vache, Haiti

We arrived in the heat with some other cruisers and a few local people by wooden boat. It was the place to see and be seen. Sunday at church. In Haiti.

Inside, the service had already started, people were on their feet. They were clapping. It was a chorus of suits, and lace and satin.

Men swayed their hips and clapped with vigour. A spirit was in the air, and those who felt it looked over their shoulders, and bobbed their heads, as though to invite everyone within view, to the festivity. Colorful shirts and ties moved about me.

An old woman held out her arms in eager anticipation of holding a small baby. With the baby transferred, the young mother scampered off, looking like she had a mission of her own as she giggled with friends. 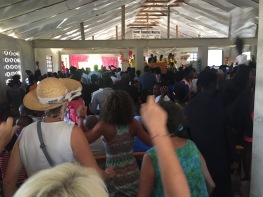 People were coming in the door, and leaving at the same rate. As one member of my family members said later, it felt “like organized chaos.”

The Soulterre church was founded by Christian missionaries, Pastor Raymond Bideaux and his wife Kathy Bideaux. They have lived in Haiti, off and on, for thirty years. They operate Islander Evangelistic Missionaries (IEM). 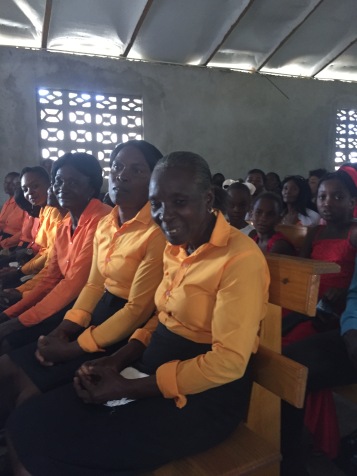 I will admit that the role of the missionaries and the term “evangelistic” puzzled me to the point that this blog post has taken me two months to put into words.

In Canada, the word ‘missionary’ carries some colonialist baggage. History does not tend to paint missionaries as the heroes of our formative story.

Here is a photo that I’m including as tribute to my friend, Cheryl Barbeau, and her family.

The nun in the photo looks nothing like the missionaries we met in Haiti. Our twelve year-old daughter, Betty, helped bring things into focus for me when she observed that some people at the church seemed to be very serious about it, but others seemed to drift in and out of church, and were there to socialize. Church is a choice. There was a concession stand outside the church, during and following the service.

My daughter, Karen, who is six, took lots of photos. She revelled in using my phone and snapped photos of anything and everyone. I had to step forward and pull her back as she lingered with the choir in front of the pulpit.

About a week later, during Paul’s 10th Birthday party celebration, I spent some time with the pastor and his wife, Kathy, on our boat, Aphrodite. They speak with a strong accent from the southern US-of-A, yet they are fluent in Creole. They have five children, all of whom were raised in Haiti.

Her kids were quick to learn Creole. And, sometimes this caused confusion with homeschooling. The letter “n” for “nail” meant nothing to the child who called a nail by its Creole name, “klou.” The Bideaux’s continue to speak Creole together to this day, even though their children and grandchildren now live in the USA. 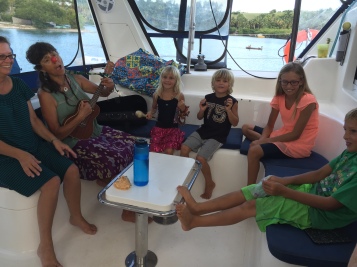 The hardships that Kathy described upon her arrival to Haiti were jaw dropping. She left the modern conveniences of the USA behind. She said she “cried every day for a year” when they first arrived in Haiti. At first, they had no beds. Kathy cooked over an open charcoal fire because they had no electricity or an oven. (There is still no electricity on Ile a Vache.) But, they remained in Haiti because she felt “the Lord had called them.”

Yet, even after the 30 years in Haiti, Kathy knows they are not entirely safe in this country. While working at an orphanage in Aux Cayes on the mainland they hid from gunfire targeted at one of their guests.

A quick google search reveals that Haitian missionaries are killed at a rate of one a year. Kathy and her husband travel with a local when they need to reach Port de Prince by car.

The Bideaux’s seem to been adopted into the Ile a Vache community, albeit slowly. Kathy can now shop by herself at the market, for example, and receive local prices. In contrast, tourists can expect to pay many, many times the market rate. Kathy is also offered the Haitian rate at a local restaurant called Ruth’s. Understandably, this level of acceptance is meaningful to Kathy and her family.

The IEM has seen the Soulterre church grow from a patch of land, to a temporary structure, to what it is today. It was strong enough to provide safe harbour to 500 Haitian residents during hurricane Matthew is 2016. The IEM currently provide meals to children on the island, which is very popular. We met a Canadian/American woman who paid for meat for the entire community one week. The need is great.

Here is a video I took during the church service. It is lively! I hope you enjoy it.